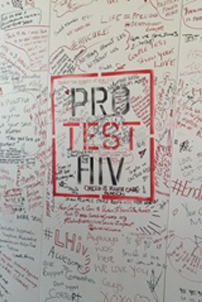 
The International AIDS Conference, AIDS 2016 took place in Durban, South Africa from July 18-22, 2016 and was attended by approximately 15,000 delegates from around the world. This is the second time the conference has been held in Durban, the first such being in 2000. Although much of the information provided addressed the situation in Africa, there were very similar challenges, barriers and strategies talked about that have application in the United States, California and Los Angeles County.


The majority of people now being infected and living with HIV/AIDS live in low to middle income countries, mostly in sub Saharan Africa. South Africa has the biggest HIV epidemic in the world with more than 6.3 million people infected amongst a population of about 53 million. In fact, one in every five adults is living with HIV disease. To put this in perspective, the State of California has a population of about 40 million and a little more than 120,000 are currently living with the virus and there are perhaps an additional 25-30% more that are not diagnosed yet. This means that the epidemic would be more than 50 times bigger in a population that is about 25 percent smaller.


Even with an epidemic this big, South Africa has made great strides forward in the last 16 years. In fact, only in the Year 2000 did South Africa actually declare finally that HIV was the actual underlying cause of AIDS. For years and despite the science, their government’s main health minister and those in elected power refused to acknowledge the relationship between HIV and AIDS and rather encouraged residents of the country infected to consume a diet of healthy foods, red beets and garlic. There was little prevention being implemented. It wasn’t until a change in government leadership around the Year 2000 that the acceptance and shifts towards treating HIV with traditional antiretroviral medications became a focus.


In 2000, there were relatively few individuals on antiretroviral therapy, so little it is not even worth mentioning here but today however, more than 3.8 million persons are reported to be on treatment in South Africa. The results of this, reported by officials have been incredible in terms of reducing the death rates, preventing infections among new borns, and in general improving the quality of life and extending life among the populations affected there.


In fact, government officials report pediatric HIV transmission rates down from several hundred thousand a year to 175,000 annually. This is still a huge number and actually, there is inconsistency in the numbers being reported. However, what is true is that regular antiretroviral therapy is being given/offered to women who are pregnant, most of the time. Or at least, increasingly most of the time. And it’s working and the data is proving that reality.


AIDS related deaths are dramatically down from a reported 500,000 deaths annually 15 years ago and at the peak to roughly 200,000 last year. This is still too much and it is not because treatment does not work. It is related to a massive problem with HIV and TB co-infection coupled with late entry into medical care. Advocates report a substantial majority of those dying present to the hospitals very sick and / or never make it there. Those who get on treatment early are said to have nearly the same life expectancy as those in the United States.


To address this, South Africa is implementing an expanding outreach and testing program aimed at reaching those infected and at risk. The government has established a treatment target of 90-90-90. This target calls for a goal that by the Year 2020, 90% of all people living with HIV will know their status; 90% of those diagnosed with HIV will receive sustained antiretroviral therapy; and 90% will have viral suppression. The South African government has also signed on to the larger global target to end AIDS by 2030. Advocates say that if South Africa can achieve this goal as well and the rest of the world meets its targets, 73% of all people world-wide living with HIV will be virally suppressed. Modeling suggests that achieving these targets will allow the world to end the AIDS epidemic by 2030. Ending the AIDS epidemic means the spread or expansion of the disease will be brought to levels of “nearly” zero increase. Near zero is a big goal and target but many say this has been done with other diseases and targets less than this are not acceptable.


These efforts require strategies to engage and keep people in care. Therefore, efforts must largely be focused on greatly reducing stigma, homophobia, transphobia and decriminalizing laws against people living with HIV or against LGBT people around the world. Attention to the plight of sex-workers and their clients must also be addressed with programs which are not punitive but are sex-positive and aimed to understand and be inclusive.


Poverty must also be dealt with as it is perhaps one of the single most determining drivers of the spread of infection, related diseases and poor health outcomes. Efforts will also require a renewed emphasis on the health and social status of young girls and women, with special programs of education, empowerment, opportunity and with attention to issues of domestic violence. Bio-medical prevention intervention programs such as PEP and Prep must be scaled up around the world as well as a renewed effort to increase condom distribution and general prevention strategies.


The ability to achieve these efforts also must be contemplated against the price of effective medications. In order to sustain this effort, drug prices must be reduced so that poor countries and people living with HIV/AIDS in these countries have equal access. Drug prices must also be reduced in higher income countries so that more of the budgets could be provided for increasing numbers coming into the system and to expand prep and other prevention efforts more widely.

A march and rally in Durban was held right before the opening day of the conference and was organized by the AIDS Healthcare Foundation and apparently in concert with other local HIV groups. Signs and messages of the organizers were about increasing access, maintaining and increasing funding, and lowering the prices of antiretroviral treatment drug costs. Organizers also shouted messages of increasing awareness and reducing stigma and discrimination. Included in these messages were calls to address laws which criminalize persons with HIV or at risk of acquiring HIV infection which themselves are a major driver propelling the epidemic. Queen Latifah led the march and more than 10,000 persons attended the march and rally. Several other demonstrations occurred throughout the conference.

As for treatment, the main discussions were in the area of long-acting injectable antiretroviral medicines which are still being studied in numerous trials. This therapy is taking existing classes of HIV medications and delivering these to people by a monthly or bi-monthly (every two months) shot. If proven effective and approved for regular use, this will eliminate the need to take daily antiretroviral therapy in the form of multiple pills and replace it with treatment that will last either one or two months. Many experts believe this treatment could be available in 12-18 months. There was some talk about continued work on a vaccine to prevent HIV, however, this is apparently still far in the distance. Dr. Anthony Fauci with the National Institute of Health did reiterate his position that a vaccine could and will eventually be discovered. There was no significant discussion or research presented on a cure for HIV although activists continue to push the scientists to speed up that research.

There was a major focus on youth and the importance of the younger generation in bringing an end to the AIDS epidemic. This was a universal theme but the question remains how to engage youth at risk. To this end, there were several panels and workshops and key note addresses on topics of youth involvement. One high profile address on this topic came from celebrity Elton John and Prince Harry of the Royal Family. Both talked about youth involvement and creating programs which reduce the barriers to information and services for youth. Within the category of youth, discussion occurred on the topic of how to reach women, MSM, transgender persons, youth in poverty and other subsets of youth of color.


Suggestions provided for effective ways to reach youth included integration of educational, sports, cultural and medical programs with HIV information. Also, there was much talk about including young people in the discussions and planning for programs and empowering and providing them the opportunity to become involved in the fight against AIDS. Many of the experts and youth themselves said that this group must be reached at younger ages, perhaps even as early as 11 and 12. This because youth themselves say some of the main barriers are in figuring out ways to ask questions related to health and sexual well being. Some of the youth said that by the time they get older and sexually active, it is most likely that they would have developed hesitancy to discuss sex and risk especially with adults and professionals. They say youth need the skills to empower themselves to be comfortable asking questions and that it is not optimal to wait until they are full adolescents. Young people face a host of problems of which HIV is only one. What is clear, the world will never end the HIV epidemic unless the next generation greatly reduces its infection rates. And only they themselves can do that.

Progress is being made in some of the most challenging parts of the world. Progress is also being made here in the United States. However, there was also a general caution expressed that potential funding cuts globally could cause huge set backs to this progress. It is feared that attention to HIV by governments might be reduced given the global challenges of war, recession and financial uncertainly. Should this happen, the promise of potentially ending the AIDS epidemic by 2030 will not be realized.


So, let’s all continue to advocate and fully implement programs quickly here in Los Angeles, California and the United Stares that will bring HIV to levels close to zero. This should be our goal and challenge to our elected and appointed leaders. It is a fact that we have all the information and tools needed to stop this disease in its track. What is needed is a renewed focus and commitment to do it.